Workshop: „Chemistry All Around Us“

As part of the Open Science Days 2019 festival, the Bureau of Metrology is organizing an interactive workshop called Chemistry All Around Us, aimed at elementary and high school students.

Workshops will take place from October 2 to October 5, 2019, from 10am to 3pm and from 5pm to 7pm in the park in front of Petrović’s Palace in Podgorica.

The UN General Assembly proclaimed 2019 as the International Year of the Periodic Table of Chemical Elements, as this year marks the 150th anniversary of its existence.

The main goal of organizing a workshop “Chemistry All Around Us” is to acquaint the students as much as possible with natural sciences (chemistry, physics, nature, mathematics). During the four days of the workshops, chemical experiments linking chemistry and physics to measurements and the Periodic Table of Elements (PTE) will be conducted. Students will also be presented with a new PTE, which, following the discovery of four more elements in 2015, has been completed. The historical development of chemistry will also be presented.

In addition, new definitions of the International System of Units (SI) for kilogram, ampere, kelvin and mole, effective as of May 20, 2019, will be promoted.

By organizing a workshop “Chemistry All Around Us”, the Bureau of Metrology, as a National Metrology Institute, scientific-research and innovation institution, seeks to foster cooperation with public school institutions and the general public, by promoting science in an accessible and engaging way.

The implementation of the „Chemistry All Around Us“ workshop is supported by the Ministry of Economy.

During May 2019, 600 students from 16 primary and seven secondary schools from all over Montenegro visited the Bureau of Metrology, as part of the event called “Open Days”. A prize contest called “The Beauty of Crystals” was organized, with participation of 82 teams from 27 schools. 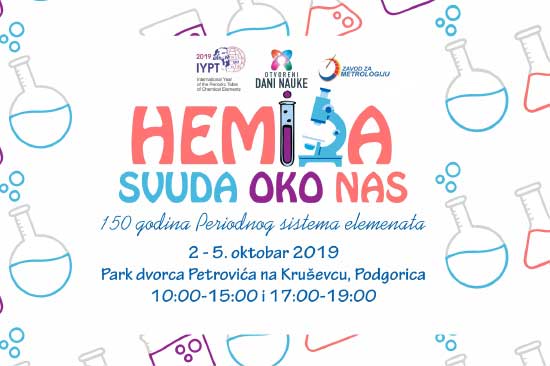