History of the Kelvin

Measuring temperature has a long history. About 2,000 years ago, the ancient Greek engineer Philo of Byzantium came up with what may be the earliest design for a thermometer: a hollow sphere filled with air and water, connected by tube to an open-air pitcher. The idea was that air inside the sphere would expand or contract as it was heated or cooled, pushing or pulling water into the tube. Later, people noticed that the air contracted in volume by about one third as the sphere was cooled from the boiling temperature of water to the ice point. This caused people to speculate on what would happen if one could keep cooling the sphere. In the middle of the 19th century, British physicist William Thomson – later Lord Kelvin – also became interested in the idea of ‘infinite cold’ a state we now call the absolute zero of temperature. In 1848, he published a paper, On an Absolute Thermometric Scale’ in which he estimated that absolute zero was approximately, -273 °C. In honour of his investigations, we now name the unit of temperature, the kelvin, after him.

When Lord Kelvin carried out his investigations, it was not yet universally accepted that all substances were made out of molecules in ceaseless motion. We now know that temperature is a measure of the average energy of motion of these particles, and absolute zero – zero kelvin – corresponds to the lowest possible temperature, a state where the thermal motion of molecules has ceased.

The reason for this is to make it easier to use in a wide variety of applications that had previously used the ‘centigrade’ scale. In our everyday life we are used to expressing temperature in degrees Celsius. On this scale water freezes at about 0 oC and boils at approximately 100 oC. Notice the conversion from kelvin to degrees Celsius subtracts 273.15, so the triple point of water is 0.01 °C. 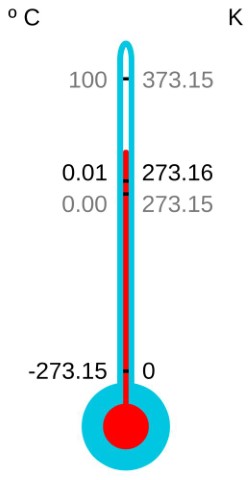