Definition of the mole

At the beginning of the 20th century, before the amount of substance was introduced as a physical quantity with the associated unit mole, terms such as “gram atom” and “gram molecule” were used to describe quantities of chemical elements or compounds. These quantities referred to the relative atomic or molecular weights. The reference value for these relative weights was the atomic weight of oxygen, which was generally agreed to be 16. After some disagreement between physics and chemistry as to which oxygen is meant exactly, the International Union of Pure and Applied Physics (IUPAP) and the International Union of Pure and Applied Chemistry (IUPAC) agreed in 1960 to assign the value of 12 to the so-called atomic weight of the isotope made of carbon with the mass number 12 (12C), correctly referred to as the relative atomic mass Ar(12C). From then on, this was used as the reference value.

At the suggestion of IUPAP, IUPAC and ISO, a definition of the mole as a unit for the quantity of the substance was developed at the end of the 1960s. Decided at the 14th General Conference on Weights and Measures (CGPM) in 1971, it has applied within the International System of Units (SI) until today, and will do so until 19 May 2019. It reads:

The mole, symbol mol, is the SI unit of amount of substance. One mole contains exactly 6.022 140 76 × 1023 elementary entities. This number is the fixed numerical value of the Avogadro constant, NA, when expressed in the unit mol−1 and is called the Avogadro number.

The amount of substance, symbol n, of a system is a measure of the number of specified elementary entities. An elementary entity may be an atom, a molecule, an ion, an electron, any other particle or specified group of particles.

What does this change mean for the mole? Even if the two definitions look very different at first glance, in reality the answer is: not much. As for all the other basic units, a constant is the basis of the definition from May 20 onwards. In the case of the amount of substance and its unit, the mole, it is the Avogadro constant. Yet, even if this constant is not explicitly mentioned in the formulation valid until May 19, 2019, it is already closely linked to the current definition, as the Avogadro constant corresponds to the number of particles contained in 12 g of the carbon isotope 12C. 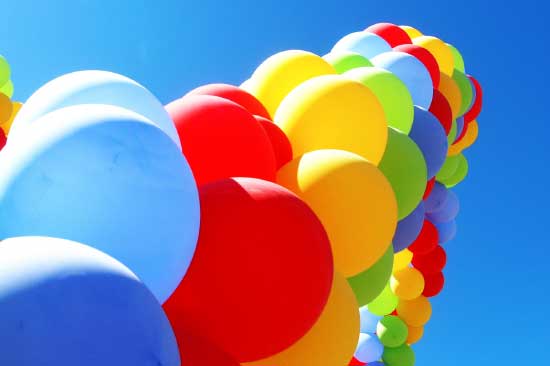 Each of these balloons can be filled with the same number of molecules but of different compounds and still have the same volume.